The Lord of the Birds of Prey

The word “Greifvogelpark” can be translated from German into English like Birds of Prey Park. Park is situated close to a small Austrian village Telfes, located in the Stubai valley at Innsbruck. My wife and I have visited the Stubai twice and seen several times in different places small poster with an invitation to visit the park. And each time, for some reason the visit was postponed. Finally, during our third visit, I determined that we have to go there. And one day it happened. 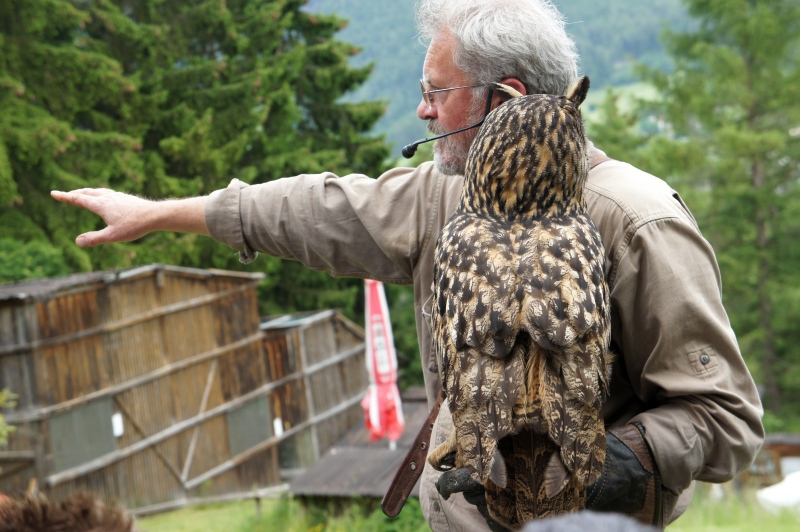 Initially, we were moving on a rather narrow road following the signs, then a narrow short trail through the woods until wicker fence was started. And finally, we saw the wicket, and the small house, which also was served as a cashier. Home-made, large wooden cages for birds raised up the steep hill, where we did not see anything at the first glance. There was only audible bird scream in different ways. Park worked until 5:00 pm, and it was just a few minutes after five. After standing at the house and seeing no one, we called the owners. A man went out of the house. We asked – if it is not yet too late to see the park? - He smiled broadly in response and said to us: - Of course, it's not too late.

It was a very unusual man. Above-average growth, age round 60, with a beard and gray curly matted hair around his a little bald, wearing glasses, reminiscent of John Lennon's glasses. He was wearing a little scruffy; shirt leaned back from his waist pants. He looked at us with curiosity, smiling a little ironically, as an experienced coach looking for beginners, first crossed the threshold of the sports hall.

It was Mathias Premm - the host and the owner of the Birds of Prey Park. A young eagle sat on his right hand over the wide glove made of rough thick skin that covers the arm almost to the very forearm. The small ring around one of the clutches of bird was attached to a chain. While eagle several times was slipping from the hand, Mathias Premm returned him to the place by elegant movement.

We walked to the park. Then we began to climb up the slope to a small area. There were few adults and children there. While we were climbing, Mathias Premm has spoken with us, and we have learned that the bird on his arm is a young eagle, which being helpless people find and picked up in the woods and brought to Mathias. And now he is going to teach a bird to fly and we can watch this.

Two wooden columns were dug in located approximately 20 meters each from other. A metal wire hung between them. Matthias unhooked the eagle’s chain from the glove, and then he slipped wire through the ring and put the bird on a pole. He moved away to the opposite pole and began to invite the eagle by movements. Eagle looked at the man and obediently flew to him. He has landed on the drawn arm with the glove and got a small piece of meat as a sign of encouragement. This action was repeated several times.

Teaching a bird to fly, Mathias went on to talk to us. So, we learned that he wants to teach the young eagle, and then set free. Learn to everything - to fly and to hunt. And what if not to teach, he lost in the wild. Matthias replaces the bird's mother. Later on when Mathias picked up another eagle, the bird began to cry so nervous and loudly, as if he would complain. And when we asked the owner what it means, he replied that the young eagle sees him as a mother, and thus expresses his affection and trust in him.

And we learned that the bird is always the master of the situation, and that if once she will fly away and never return, it will be her decision. We have also asked Mathias if he might be hurt by birds, and he showed us his hand, taking off a glove, and we saw a lot of small scars.
Forty minutes went by. We walked all the cages and see owls, eagles, hawks. And in one cage was sitting a wise huge vulture.

We said warmly goodbye in the end of the visit. Mathias replied that he would like to visit Russia; he is interested in our birds and our rich nature.

Turning on the way back, I was thinking about this peculiar man. I was very impressed by this meeting.

Again I have seen a man, whom I could call a leader. People used to call as leaders Heads of States, CEOs like Steve Jobs and so forth.

I do not dispute that Steve Jobs belongs to a cohort of leaders. God forbid. This is a person who is a true example as a leader for the thousands of people around the world. I just want to say that leadership or superiority, as I understand it, is available to everyone. And Mathias Premm - is an example of superiority and uniqueness on the individual not group level. He created his own world, its language, and its own domain. On the Internet site of the park, I found the perfect words of Matthias Premm and I want it to quote. "We understand only what we know, we love only what we understand, and ultimately, protect only what we love".
Perhaps only such people are able to devote his life to the Birds of Prey. He is completely happy person. And really - he lives in his own world with the proud eagles, vultures and hawks, cares about them, talks to them. They understand each other. What else could be better than being an Owner of his life and the leader of himself?